As the days continue to grow cooler, warm up with tonka bean oil. Its smell is a mixture of dark caramel, honey, vanilla and musk: a perfect scent for the weather. Tonka bean essential oil comes from the seeds of the Tonka tree which grows in Central and South America. The tree is very valued for its timber which is hardwood but it's the bean that has grown in international popularity. The beans are used in cosmetics, tobacco, food and perfumery. Tonka bean essential oil is a fixative, used to enhance and “fix” other scents in a perfume blend. Spiritually, the oil is known as the Oil of Initiation. Besides smelling delightful, when diluted it can be used as an antiseptic, expectorant, and an aphrodisiac. 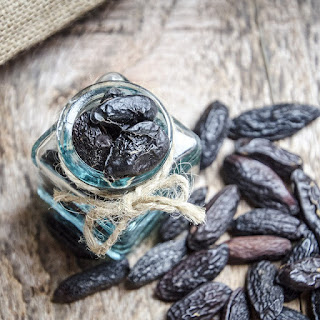 Try wearing the scent of the month, holding the stone of the month and drinking a tea made with the herb of the month for a very invigorating experience! This is a way to put you deeper in the mood of the season.

Email ThisBlogThis!Share to TwitterShare to FacebookShare to Pinterest
Labels: Essential Oil of the Month

SUMAC: Herb of the Month 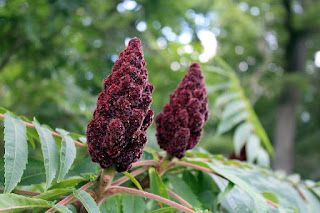 As autumn continues and seasonal colors begin to abound, sumac is among the brightest of the plants. Bright red sumac, with its leaves turning pink to orange to yellow, and its furry clusters of berries, gather in abundance around roadways and forests. Sumac is a shrub that grows in subtropical to temperate climates throughout the world, including North America, East Asia, and Africa. There are many different varieties of sumac, the red kind many see growing is often staghorn sumac or smooth sumac. The bad hype sumac gets is pretty unfortunate. Most people have heard the term “poison sumac” but the kind that is poison has green or white berries, not red. It's harder to find the white variety as it grows in swamps or marshy areas and most have not seen it at all. The red sumac is a great medicinal and culinary herb that many cultures like the Middle East have utilized for thousands of years. Sumac contains very high levels of vitamin C and the berries, bark, leaves, sap and root of the harmless sumac variety are used for many different conditions including skin conditions, inflammation, digestive issues, cold and flu, urinary tract problems, diarrhea, and fever.

Late summer, autumn, and even very early winter sumac berries can be harvested. It is best to harvest sumac in late summer or autumn (now!). When you are harvesting, try to make sure the sumac berries are dry- it is best not to harvest them right after a rain shower.

Enjoy the last glimpses of warmth with soothing sumac lemonade.

Sumac Pink Lemonade
Add 1/8 to ¼ cup of berries to a quart size jar of water and place in the refrigerator overnight. Otherwise, you can heat this up in a saucepan over medium heat with equal parts sugar, stirring until the sugar has dissolved, for about five minutes before straining. Depending on your preference, you can add honey, maple syrup or stevia.

Email ThisBlogThis!Share to TwitterShare to FacebookShare to Pinterest
Labels: Herb of the Month

Ginseng: Which One is Best? 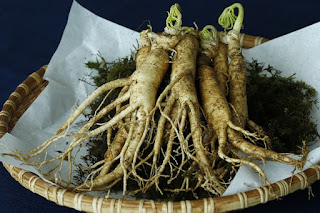 The Chinese have used ginseng for thousands of years, believing it enhances sexual performance, increases energy and eases stress. Many Americans are skeptical, demanding scientific validation. A summary of what is known about the herb may help you decide whether to reach for ginseng every day, on occasion, or opt for something else.
The generic name Panax comes from the Greek pan, "all", and akos, "cure"; however, Traditional Chinese Medicine rarely uses the herb alone to "cure" anything. Instead, it is used as an ingredient in their therapeutic formulas. It's used to restore vital energy (qi) and regulate body systems- in Chinese medicine, the primary purpose for healing is to restore balance and strength so the body can heal itself.
The best known of the true ginsengs are Asian or Oriental (P. ginseng), available in white or red forms, and American ginseng (P. quinquefolius). White ginseng (actually a very pale yellow) is the peeled and dried root of Asian ginseng. The fresh root is considered "cooler" than red and useful for people who need a little energy boost. Ginseng root turns red and hard when the fresh root is slowly steamed, then dried which alters the ginsenosides, making it more stimulating than the white form. Red ginseng is frequently used for people aged forty or older who show low energy. American ginseng is considered by the Chinese as a better tonic than Asian ginseng for supporting the adrenal glands, regulating metabolism and increasing fluids. It is seen as more cooling than Asian ginseng, and thus appropriate for younger, "hotter", stressed individuals.
When choosing ginseng products, look for those standardized to at least 4 to 5 percent ginsenosides. Follow label instructions; 100mg one to two times a day is the usual dose. With ginseng extract or tinctures, it is recommended to take 1/2 tsp in a little warm water two to three times a day for one to two months, then stop for one week. You may continue taking the tincture for one to two more months. To make a tea, use 3 tsp of dried or sliced root per cup of water. Simmer covered for 45 minutes. (Red root requires longer cooking times). Strain and drink a cup two to three times a day. You can refrigerate leftovers, covered, for four days.
Taking a ginseng supplement or tea in moderation is safe for most people, but it is not appropriate for people with high blood pressure. Asian and American ginsengs have been shown to increase blood pressure in some people. Though not a true ginseng, Siberian ginseng would be a better choice for them, as it will not raise blood pressure. Young children and pregnant women should avoid ginseng.

Email ThisBlogThis!Share to TwitterShare to FacebookShare to Pinterest
Labels: Articles 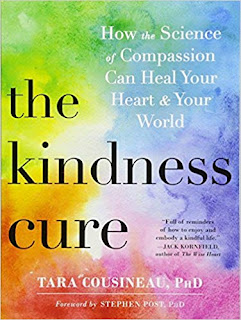 It’s time for a kindness revolution. In The Kindness Cure, psychologist Tara Cousineau draws on cutting-edge research in psychology and neuroscience to show how simple practices of kindness—for ourselves, for others, and for our world—can dissolve our feelings of fear and indifference, and open us up to a life of profound happiness.
Compassion for ourselves and others is our birthright as humans—hardwired into our DNA and essential to our happiness. But in our fast-paced, technical savvy and hyper competitive world, it may come as no surprise that rates of narcissism have risen, while empathy levels have declined. We now find ourselves in a “cool to be cruel” culture where it’s easy to feel disillusioned and dejected in our hearts, homes, and communities. So, how can we reverse this malady of meanness and make kindness and compassion an imperative?
The Kindness Cure draws on the latest social and scientific research to reveal how the seemingly “soft skills” of kindness, cooperation, and generosity are fundamental to our survival as a species. In fact, it’s our prosocial abilities that put us at the head of the line. Blended with moving case studies and clinical anecdotes, Cousineau offers practical ways to rekindle kindness from the inside out.
We are wired to care. The very existence of our human species evolved because of an intricate physiology built for empathy, compassion, and cooperation. Yet we have an epidemic of loneliness, indifference, and cruelty, and we see these destructive trends on a daily basis in our families, schools, neighborhoods, and workplaces. This important book teaches effective skills in compassion, mindfulness, and social and emotional learning, and reveals successful social policy initiatives in empathy taking place that inform everything from family life to education to the workplace.
Kindness has the exponential power to renew relationships and transform how we think, feel, and behave in the world. Will you be a part of the revolution?